We are pleased to report an outstanding performance in the FMG China Fund, which registered a YTD* gain of +3.4%, significantly outperforming the Shanghai composite benchmark which fell -16.8% during the same period. The outperformance is attributable to our approach of being invested with what believe are the 3 best managers playing the China A Share market as well as an important contribution from receiving the capital gains tax. Despite the increased volatility of the market over the past 18 months, we continue to believe that by sticking to a concentrated, handful number of managers, we are in a much better position to outperform the benchmarks.

Capital Gains Update – In April, following months of communication with each of manager, we are pleased to see that finally the Capital Gains Tax (CGT) provisions saga has been resolved. The underlying managers have settled with their biggest QFII providers and have therefore been able to write back the majority of CGT provisions they held back until then. This contributed immensely to the Fund’s YTD performance. Our strategy and decision to maximize our allocation to these managers has paid off immensely, as one can see from the Fund’s out performance.

Economic Update – Talk of hard landing is long gone and we are now finally seeing signs of life in the Chinese economy. Green shoots of very good data are finally filtering through the newswires and we can say with a certain degree of confidence that the efforts put in by the Chinese government are paying dividends. Fiscal and monetary measures, such as six rate cuts, significant increases in fiscal spending and policy support measures were compounded with a generally improved sentiment in the equity markets, as evidenced by a recovery in oil prices, a stabilization of EM FX, including the CNY, better than expected economic data and reduced geo-political tensions (Russia amongst others). We had always been critical of how the Chinese retail market was too harsh on the downside and too lethargic on the upside – the sell-off in August 2015 and in January 2016 are testament to that view. Whilst international media frenzies about a China hard-landing, we take the opposite view and are actually impressed by how the local Government engineered a slowdown by using a hawkish monetary policy, with the country still well on track to grow at a 6% – 7% p.a. The chart below is testament to the view of a softer, gradual slowdown rather than a hard landing which could send shock waves through the system. 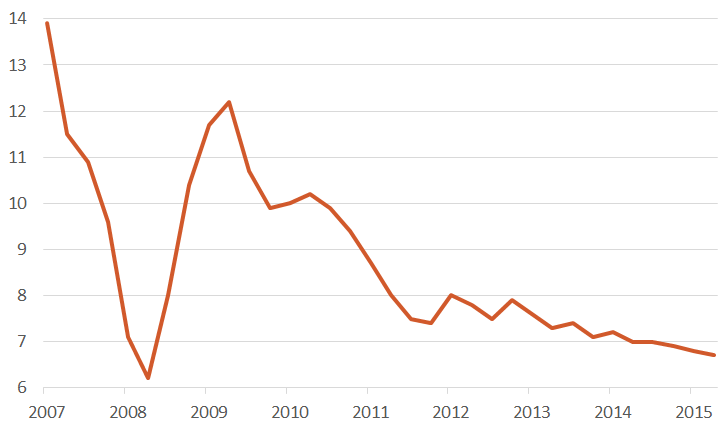 Market Update – We believe the market is underestimating the sheer force of a China rally and we are convinced that the market is currently undervalued. Excluding the massive stimulus launched by the local Government was underestimated by the analysts’ estimates, as evidenced by recent upticks in the CITI China Economic Surprise Index. However, unlike previous trends, the market reaction has been muted and not followed the trend. Absent any sentiment shocks such as the margin retail lending bubble, the IPO process or the circuit breaker debacle, this is a case of mispricing and are therefore extremely bullish in this regard. 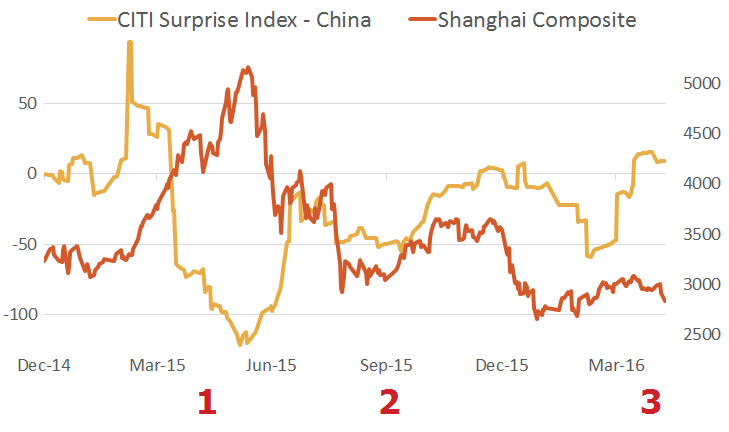 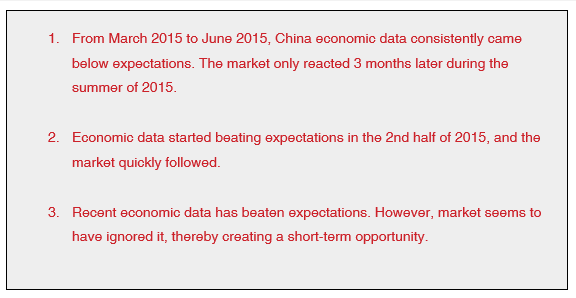 Future Catalysts and Concerns – Some concerns arise from any sharp movement in the CNY that could destabilize investor sentiment. Also, a huge amount of local corporate debt will come due in the next 2-3 years which could put some companies under pressure, although the lower refinancing rates will act as a cushion. This may result in a blip in default rates. However, the story is looking rosier than ever. Apart from the above economic and market triggers, 2 more catalyst exist, namely: