It was a strong quarter for the Fund, helped by the recovery in the Russian stock market, as the Russian economy is recovering after two years of recession. It is expected that the economy will grow a healthy 2.1% this year despite continued economic sanctions.  Higher oil prices play its part in the more rosy picture as well as a significant drop in inflation, which has resulted in four rate cuts this year.  As a result of these positive developments, the market gained 15%.

Indian equities posted a modest gain of 2-3% for the quarter after a very strong first half of this year and remain among the best performing stock markets year-to-date.  The market benefits from a weakening USD, modest inflation and historically attractive interest rates.  In addition to this, local Indians started to buy their own stock market where September alone saw more than US$ 3 billion of new money from local investors.  On the political side, the popular and hard-driving Prime Minister Narendra Modi continues to deliver needed reforms, and the election in 2019 is by most observers considered in favour of Mr Modi as the opposition is weak.  With GDP growth of around 7%, India remains a good story.

It was a strong quarter for Chinese equities.  The macro picture is stable and inflation remains under two percent. The seasonal slowdown in infrastructure spending in some larger cities target are undertaken to slow down increases in property prices.  The government cut the reserve-requirement ratio to help bank lending to smaller companies.  The massive economic expansion in China during the last 30 days has taken its toll on the environment.  The environmental department conducted inspections of 40,000 factories and over half were breaking environmental regulations. China’s production of new-energy vehicles rose by 56% year on year in August, which is indeed encouraging for a country that produces almost 30 million cars per year. 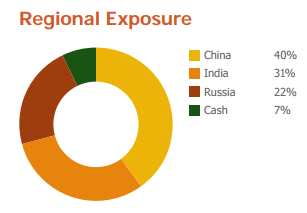