The best performance came from the fund’s Latin American exposure with the Brazilian exposure. The big event we announced in the last report, where MSCI announced the inclusion of China A-shares into the widely followed MSCI EM Index, is a future trigger. Russia, being a 13% position at the end of the quarter, saw a nice and overdue rally benefitting from stronger crude prices, several interest rate cuts and an improved economic outlook.

India had a softer quarter with a modest gain of 2% on the backdrop of an extremely strong first half of this year.  Having just implemented the “one nation – one tax” tax regime, the so-called GST tax (goods and service tax), abandoning the complex and fragmented tax in place before.  In a country with almost 1.3 billion people, 29 states and 7 unions, this was a monster project worthy for a driven leader, Prime Minister Modi. The benefits of this major implementation should be seen from early 2018 and onwards.

MENA has a non-eventful quarter and the weighting at the end of the quarter stood at 10% despite a 20% rally in oil prices.  The stalemate continues in Qatar, the tiny nation that represents 0.03% of the world’s population but nearly 32% of the natural gas exports.  Saudi Arabia’s “Vision 2030” is slowly making progress as female drivers are now allowed in the Kingdom.

Africa did not contribute to the performance for the quarter and stood at 7% of the portfolio at the end of the quarter. 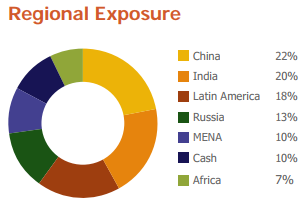