The Vietnam Fund returned -4.4% in August with a NAV of USD 1,820.85, bringing the net return since inception to +82.1%. This represents an annualised return of +17.6% p.a. The August performance of the Ho Chi Minh City VN Index in USD was -0.2% while the Hanoi VH Index gained +2.6% (in USD terms). Since inception, the AFC Vietnam Fund has outperformed the VN and VH Indices by +39.2% and +40.8% respectively (in USD terms). The broad diversification of the fund’s portfolio resulted in a low annualized volatility of 9.20%, a high Sharpe ratio of 1.89, and a low correlation of the fund versus the MSCI World Index USD of 0.30, all based on monthly observations since inception.

In August, we saw a broad correction early in the month. While blue chips, led by banks, recovered strongly and small- and mid-caps underperformed with their indices declining by about 3% in August, many of our stocks also corrected strongly over the month which provided us with a nice opportunity to reduce our cash position and to invest in the most attractively valued companies in our portfolio. We also decided to exit a small-cap position which we had since the beginning of the launch of our fund, at an attractive price level. 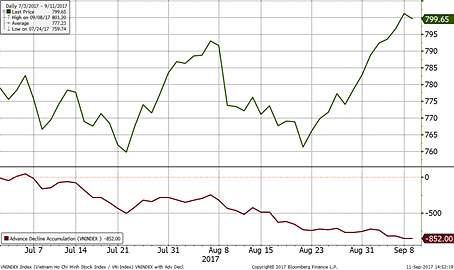 As in previous years, during periods of extremely weak market breadth (advance / decline ratio), it is next to impossible to escape losses with a broadly diversified portfolio, as we are running. The real astonishing and disappointing development was the divergence of the majority of stocks and index heavyweights like for example Asia Commercial Bank, which rose by more than 10% in August, and which cannot be bought by foreigners since the foreign ownership limit has been reached for years. On the positive side, such sharp corrections without any negative economic news offer great bargain buying opportunities, and hence we used some of our cash to increase the position size in all of our most attractively valued stocks.

Meanwhile, the weakness in the USD has taken pressure off of any meaningful depreciation in the Vietnamese Dong, although seasonal weakness towards year end is quite likely. We rightly pointed out a top in the USD index in early 2017 and the following weakness in the greenback helped emerging market stock markets immensely this year. It now looks like the USD is oversold on a medium-term basis and is testing important support levels, and it therefore will be interesting to see where currencies are heading in the coming weeks. 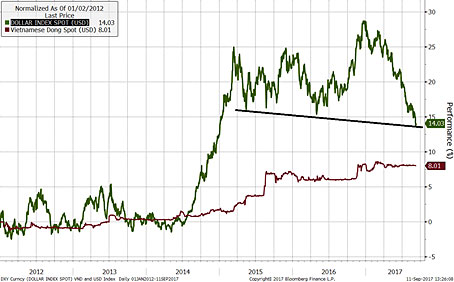 Whatever the future direction of the USD holds, the volatility in the USD is certainly much higher than in the Vietnamese Dong, which has moved less than 10% over the past 5 years. Other major currencies including the Euro and Japanese Yen have been even more volatile with fluctuations of between 30-40% over the past five years.

Although emerging markets performed well in 2017, they are still undervalued versus developed markets, which are trading at pre-crisis valuations and most indices are already higher than 10 years ago. Both frontier and emerging markets would have to rise about 50% to match those valuations, not to mention the current valuation of our portfolio, which would have to rise another 50%, just to catch up with the current valuation level of Vietnamese large caps. 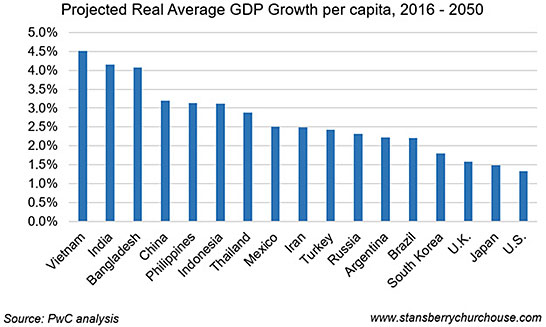 Despite many uncertainties, one can clearly the optimism in the long term for Vietnam, which is also the reason why we launched the AFC Vietnam Fund a few years ago.

Export values continued to grow impressively, by 17.9% in August, one of the fastest export growing countries in the world, to USD 133.5 billion. Value of imports was USD 135.6 billion, leading to a slightly smaller trade deficit of USD 2.1 billion in comparison to 1H2017.

This website (www.fmgfunds.com, “the Website”) belongs to FMG (Malta) Limited (“FMG”) which is licensed by the Malta Financial Services Authority (“MFSA”) as a category 2 Investment Services Provider and is authorised to as a full scope alternative investment fund manager (“AIFM”). The Website is intended solely to provide information about the business of FMG and the funds it manages and represents its and its affiliates views and opinions. FMG exercises all reasonable care to ensure that the information provided on the Website is accurate, reliable and up-to-date and any material available on the Website is non-binding information posted for illustration and discussion purposes only and is also subject to change without prior notice. However, FMG shall not be obliged to remove any outdated information from the Website, nor to expressly mark it as being outdated.NO OFFER, NO SOLICITATION Nothing contained in the Website constitutes or shall be deemed to constitute a financial, legal, tax or other advice of any kind. Information contained in this Website should not be considered an offer to sell or a solicitation of an offer to buy or subscribe for an interest in any investment vehicle or any other securities, to or from any person in any jurisdiction where (by reason of that person’s nationality, tax residence or otherwise) the publication or availability of the Website is prohibited. Any offer to invest based on the content of this website will not be capable of acceptance. Persons who visit this website should comply with these restrictions failure of which may constitute a violation of the law in any applicable jurisdiction. If the information and documents are published on the Website by FMG, then FMG will rely on the information provided by the fund providers regarding distribution licenses for the investment instruments. FMG does not guarantee the accuracy of distribution authorization information and can therefore not be made liable for incorrect data/information. The collective investment schemes mentioned in this Internet site may not be offered or publicly distributed in or from Switzerland without authorization granted from the Swiss Financial Market Supervisory Authority (“FINMA”).  If some of these are approved, then this will be expressly specified.